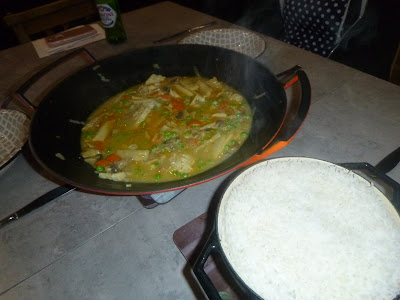 An interesting fish curry, as most of the vegetables were very definitely English ... but a small tin of bamboo shoots added a tiny oriental edge ... A malaysian curry powder and coconut milk - mildly spicy, and a really nice texture.

1.  Finely chop onions, and crush garlic, fry in groundnut oil.  Put the rice on.
2.  Add curry powder and stir in well.
3.  Add chopped carrots and mushrooms, then add coconut milk and simmer until the veg are a bit cooked.
4.  Put the fish on the top, cover and allow to steam/poach for a few minutes.
5.  When the fish is nearly done add a tin of bamboo shoots and a handful of frozen peas.
6.  Stir in - ready in 2 minutes.
7.  Serve, scoff - easy and very tasty.
Posted by Sian at 08:28:00 No comments: 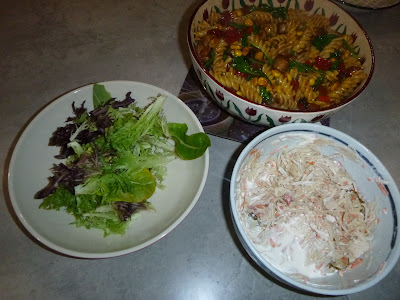 The veg box lands tomorrow, and we're trying to use stuff up from the cupboard.  The fresh stuff was tomatoes, spinach and salad leaves.  The fridge/cupboard stuff was some sweety peppers and half a jar of Polish salad.  What to do with sausages which is tasty, but not too faffy?

Polish salad in a jar
Mayonnaise

1.  Sautee chopped red pepper in olive oil, add sausages, and cook them through.
2.  When sausages are nearly cooked - chop the into bite sized pieces.
3.  Dice sweet peppers and tomatoes.
4.  Drain and rinse the polish salad, stir in mayonnaise and put in the fridge until ready to serve.
5.  Cook pasta.
6.  Chuck peppers and tomatoes into sausages, simmer gently.  Add sweetcorn after a few minutes.
7.  Drain pasta, chuck into sausage mixture and handfuls of spinach.  Stir until spinach is wilted.
8.  Serve, with salad leaves, scoff.  (veg dodger had thirds!)

Roast salmon, with dill and mustard sauce, garlicky beans and a kind of pilau - for Moulin Rouge! 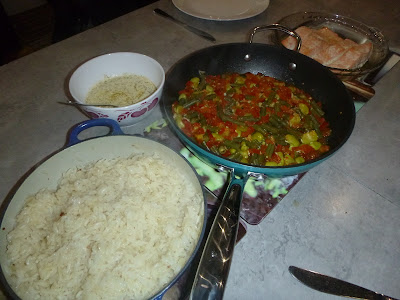 Many Saturday's we have movie night, and I try to theme dinner with the movie.  This week it was Moulin Rouge! so I took a French take on dinner.  It's not restaurant quality presentation, but though I say it myself I was very, very tasty.

Double peeling the broad beans is tedious, but the resulting beans are worth it, as you don't have to chew the rubbery green coatings. 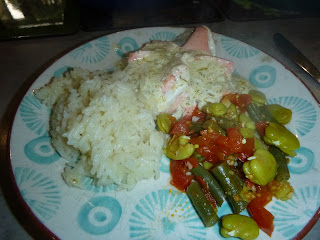 1.  Prep the broad beans by podding and peeling grey layer.  Chop green beans and finely chop tomatoes.  Sautee gently in olive oil, with A LOT of crushed garlic.  Add a little water/stock and simmer, with a lid on for about 30 minutes.
2.  Drizzle salmon fillets with olive oil, cover with foil and roast for about 20 minutes.
3.  Melt a good bit of butter, and add very finely chopped shallot.
4.  Start the pilau, sautee finely chopped shallot in olive oil.  Add rice, turn in the oil until every grain is coated with a film of oil, then fry a little longer until the rice starts to cook slightly.  Now add flavourful stock, stir in, turn the heat right down and put the lid on.  Should be ready in 15 minutes.  Turn the heat off and let it just sit there and keep warm in the steam.
5.  Finish the sauce by adding dill, a teaspoon of dijon mustard and a spoonful of flour.  Whisk in lemon juice.  It might look a bit split but just keeping whisking.  Just before you are ready to serve stir in natural yoghurt, keep it on a very low heat.
6.  Serve, scoff ... it was delicious. 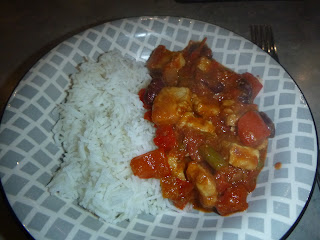 1.  Sautee chopped onions and crushed garlic in olive oil.
2.  Add chopped pork loin steaks, and stir around, add cumin seeds and chilli flakes.
3.  When the pork starts to brown a little round the edges, add chopped pepper, beans and tomatoes.
4.  When the veg have softened slightly add a good dollop of american mustard (the sweet hotdog sort is best).
5.  Add stock, from a cube in our case, and a tin of drained and rinsed kidney beans.
6.  Simmer for a good 20 minutes.  Add the tin of chopped tomatoes, salt and pepper.
7.  Put rice on - I use the adsorption method - rice in the pan, cover with cold water to an inch above the level of the rice, bring to the boil.  As soon as it boils turn the heat right down and slam the lid on.
8.  Simmer again (putting the tinned tomatoes and salt in later reduces the toughening up of the skins of the kidney beans).  Stir occasionally to prevent it sticking to the bottom of the pan, check that it doesn't get too dry, add a little water if it is.
9.  Serve, scoff, seconds ....
Posted by Sian at 04:03:00 No comments: 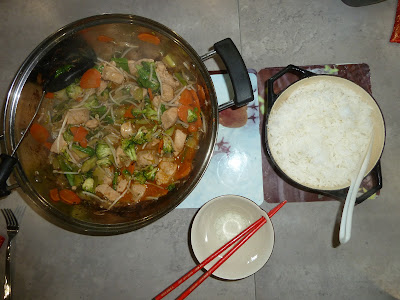 OK, I "cheated", I used a curry paste - but everything else was from scratch.  Using up vegetables in the bottom of the fridge, it was a bit of a change.

1.  In a wok, fry diced chicken in peanut oil, add chopped onions and cook for a few minutes.
2.  When chicken is nearly cooked add a spoonful of curry paste and crushed garlic, stir around.
3.  Add a little water and let the chicken cook through a little.
4.  Put the rice on - absorption method - rice in pan, cold water to 1 inch above the rice, bring to the boil - slam the lid on, turn the heat right down.  Ignore.
4.  Chop carrots, broccoli stems, green beans, and the chopped white end of the pak choi and add into the mixture.
5.  Add a tin of coconut milk and simmer for 5 minutes.
6.  Splash in fish sauce, add green ends of pak choi, tiny broccoli florets and beansprouts.  Stir.
7.  Serve, scoff
Posted by Sian at 11:57:00 No comments: 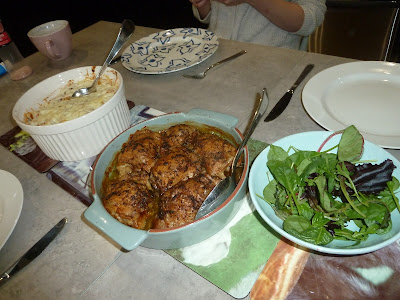 The veg box arrives in two days, so we're using up what's in the fridge.

1.  Drizzle chicken thighs with olive oil and rub in chicken rubs, roast at 180 for about an hour.
2.  Sautee finely chopped onion, crushed garlic in olive oil.
3.  Chop all other veg into small cubes and add into the onions and garlic, fry until a bit soft.
4.  Add passata and water, simmer until veg is soft - about 40 minutes.
5.  Meanwhile, make pasta according to packet instructions.
6.  Drain pasta, add to sauce, transfer to oven dish.
7.  Top with grated pecorino, and pop in the oven to melt.
8.  Serve, with a green salad, scoff.
Posted by Sian at 06:17:00 No comments: 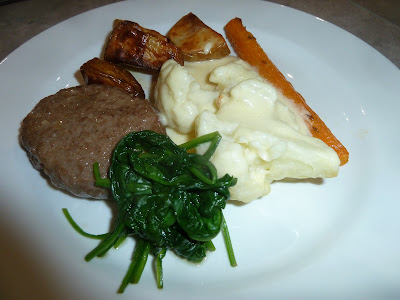 Theme-ing dinner with film night - when the film is "I love you Phillip Morris" ... In other days I would have popped to an Asian supermarket for those sectioned thali trays ... but these are tricky times, so I followed the theme of separate items, rather than a casserole type thing.

So, burgers, roast potatoes, carrots roasted in cumin, cauliflower cheese and wilted spinach.
Posted by Sian at 08:17:00 No comments:

Toad in the hole ...how retro can you get? 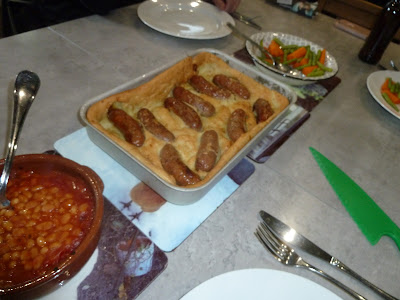 Redefining comfort food?  I don't know - but we all enjoyed this classic tonight.

1. Stick the sausages in an oven dish, and bake for a bit.
2.  Make the batter mix ... some flour, break  some eggs in, whisk, add salt and pepper - should still be sticky - add milk and whisk again.
3.  When it's smooth, and a bit thicker than double cream, it should be OK.  Leave to rest for 20 mins
4.  Start gently frying onions for the gravy.
5.  Prep the rest of the veg - put baked beans into the bottom of the oven, steam, the beans and carrots.
6.  Shake the sausage pan, pour in batter mix, and put back in the oven - put the baked beans in an oven proof dish in the bottom at the same time.
7.  Steam the veg, and finish the gravy with stock/cornflour ... or gravy granules.
8.  25 (ish) mins later ... serve, scoff ... it was GOOD! 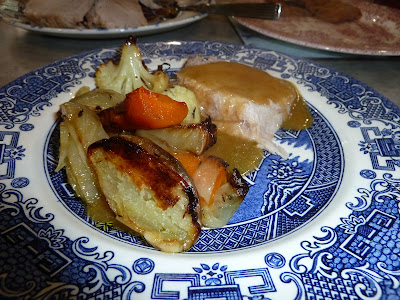 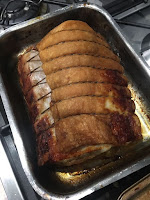 1.  Salt the pork joint - at least an hour before cooking it.
2.  Put the pork into a hot oven, for 20 minutes, then turn it down.
3.  Prep the veg ... I mixed everything except the cauliflower in olive oil with a little salt 2 hours before I expected dinner to be ready, into a roasting dish.
4.  Turn the oven down, to let the pork cook.
5.  An hour and a bit before you want to eat ... stick the veg into the oven.
6.  Pour apple juice around the pork (I think this is where I could have gone wrong, had I wanted really crisp crackling... but fortunately for me the preference is for nice fatty/chewy skin ... who knew!?)  but this makes for the fantastic gravy.
7.  Do what ever it is you are doing ... etc
8.  Stick the floret of cauliflower in with the rest of the veg, stir around and put back into the oven.
9.  20 minutes before serving ... pour the juice from the pork roasting tray into a jug.  Spoon off about 3/4 of the fat.  Make a gravy with a bit of the fat off the top, mix in some flour, stir into a smooth paste - then add the rest of the juices ... simmer (add more apple juice/stock if you think it needs it)
10.  Pull the pork out of the oven and let it rest for at least 15 minutes.
11.  Serve, scoff ... receive accolades ... bloody hell, it were gorgeous!  We all had thirds 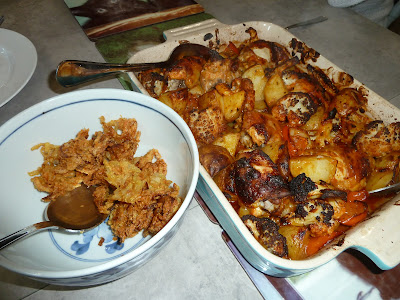 Chicken thighs in the freezer - a random jar of tandoori tikka masala sauce in the cupboard - some potatoes and a cauliflower in the veg box ... Tah dah!  Also, luckily the last veg box left us with quite a few onions and I had a bag of gram flour ... so - it was almost as if I had planned it.

1.  Marinade the chicken thighs in masala mix - mine was from a jar - which is unusual - but it was using up what was in the cupboard!  Leave for a couple of hours.
2.  Into an oven dish, with a little oil on the bottom, add cubed potatoes, cauliflower florets and red pepper chopped into biggish pieces.
3.  Mix the veg together in an oven dish/tray.
4.  Plonk the marinated chicken thighs in and between the veg - and mix up gently.
5.  Roast it all for about 45 minutes - an hour at 180.  Mix through a couple of times.
6.  Prepare onions - remove skin - cut into half moons - shake into a bowl.  Add a teaspoon of salt and shake through the onions.  This will release some moisture, and soften the harsh flavours.
7.  To the onions add chilli flakes, fennel seeds, onion seeds (whatever you think might work) and toss about a bit.
8.   To the onion mixture add a scant tsp of bicarb, a handful of gram flour and mix together.
9.  Heat sunflower oil in a pan and fry the onion mixture in hot oil, in small spoonfuls, for 30 se onds - to a minute-ish on each side - drain on kitchen paper.
10. Serve, scoff ... delish..

Sian
My name is Sian. I cook. I take a few pictures. I watch Coronation Street. I ramble on about stuff sometimes. This blog will show you what I had for tea, with brief "instructions" of how to produce something similar, if you want to - and the odd snippet of something tasty I have found. I will try to indicate if things are suitable for certain diets (eg. vegan, gluten free, lactose free etc). This is not comprehensive, or backed by any legal position - just something I think some of my mates might find handy. Please feel free to leave comments. To leave comments, click on the word comment at the bottom of the post - use the profile anonymous, if you haven't got a google account, WordPress ID etc. Oh, just to add a thingy - Blogger uses some cookies to track traffic, but I haven't added any other Cookies to this blog ... but always bear in mind cookies are all around, keep your computer protected.